Posted on April 4, 2007 | In Uncategorized No Comments 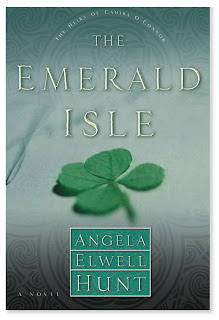 Sorry to say that the writing is truly all a blur (this is what happens as I age). I wrote them. I rewrote them. And rewrote them.And hoped and prayed that someone else would enjoy them as much as I did.

Anika O’Connor of Prague is clothed in armor and carries a sword, as one of the knights of Chlum. Her disguise protects her from the lecherous son of Lord Laco, who would never think to search for her among the men at arms. Prague is on fire with religious reform, and Anika joins the struggle for religious freedom that cost her father his life. When Lord John of Chlum learns of Anika’s deception, he agrees to allow her to continue as a knight until a time of his choosing. Then she must don the garb of the woman she is. Can Anika give up the life she has come to cherish? And will the love in her heart be returned by the Master of Chlum?

Aidan O’Connor was raised among pickpockets and prostitutes in a Dutch colony on Java, Indonesia. But when a world-famous cartographer discovers her natural artistic talent, she is given a chance to leave her troubled life behind. Disguised as a boy, Aidan joins her benefactor at sea and begins the work of drawing the flora and fauna of the new world. This fresh beginning holds far more than adventure, however. It also holds a great love. But can this love survive the force of Aidan’s past…and her ambitions for her future?

When Flanna O’Connor, a young medical student in Boston, is cut off from her family in Charleston at the start of the Civil War, she decides to disguise herself and move south with the Union Army. While in disguise, she must prove herself as a soldier and a doctor, both to her messmates and to Major Alden Haynes, brother to the man she has tentatively agreed to marry. But when Flanna and Alden are trapped between two armies, can Flanna trust God with her future?and with the love she has sought all her life?

This book- The Emerald Isle- is indeed my favorite book above all three of the preceding books in The Heirs of Cahira Series. After Kathleen O’Connor has faithfully recorded the lives of three previous O’Connors, each who left traditional roles to follow the paths God ordained for each of them- each two hundred years apart, Kathleen herself must fulfill her own destiny. Her good friend, Taylor Morgan is now engaged, and is dragging Kathleen off to Ireland for the wedding. There, Kathleen finally grows into the role to which God has called her, though kicking and screaming. Entwined with Kathleen’s story is the story of the first O’Connor- Cahira, whose story is much better than Romeo and Juliet! I never enjoyed a book so much in my entire life! –Ruth Clementson, Amazon reviewer.

If this is Wednesday, I’m traveling all day to get home from Mt. Hermon. Great week with great folks. And I’m ready to be home.

BOM: The Research
BOM: The Writing

A Woman of Words

Disciple Matthew, a former tax collector, is invited to work with Peter, James, and John in Jerusalem. He dreams of preaching and performing miracles like his fellow apostles, but he finds his dreams postponed because of a request from Yeshua's mother. Well aware of the passing years, Mary asks Matthew to help her record the stories of Yeshua while the eyewitnesses are still alive. Reluctantly, he agrees, though the longer he and Mary work together, the more difficult their task becomes. Not only are they pressured by opposition from friends and foes alike, but Gaius Caesar, better known as Caligula, is determined to raise a statue of himself in the Holy Temple, even if it means killing every man in Israel. As Matthew works to save his people, Mary encourages him to come to terms with issues from his past. When they finally near the completion of their project, Matthew realizes that the job he reluctantly accepted might be his God-given destiny.

Dogs Having a Ball

Dogs just wanna have fun, and there's no easier way for a dog to have fun than with a human and a ball. Photographer Angela Hunt invited her friends with dogs to stop by for a photo session, and the results are as heart-warming and touching as the stories behind these human-animal relationships.