Posted on November 8, 2006 | In Uncategorized No Comments 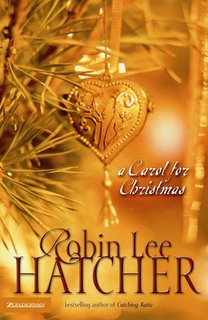 Robin Lee Hatcher began writing her first novel in 1981 and saw it published, with all its imperfections intact, in 1984. Fifteen years and thirty books later, she followed God’s call on her heart to write Christian fiction. In October 2006, her 50th book was released. A Carol for Christmas is a story about the desires of our hearts and how God wants to change and use them for His glory.
****************
A Carol for Christmas
Robin Lee Hatcher
Zondervan
ISBN 0-310-25776-X
144 pages
$12.99 (hardcover)

Carol Burke was born to sing. It was the life she had always dreamed of. There was only one thing she loved more, one person for whom she would willingly sacrifice her dreams: Jonathan Burke. Married against their parents’ wishes, both are determined to make a life together despite the hardships. Jonathan works hard at his father’s department store, leaving Carol alone in their tiny apartment. But long hours turn into late nights, thanks to Jonathan?s insatiable desire to prove himself to his father–even at the expense of the one he loves best.

Into the midst of an increasingly empty marriage comes an unexpected chance for Carol to sing again. Is this the opportunity of a lifetime, or a time for her to let go and trust her future to God? Carol knows one thing: she longs most of all to share her first Christmas with Jonathan, creating their own memories and traditions and breathing new life into their marriage.

Then a broken promise leaves her wondering. Can anything, anyone, even God, heal her crumbling hopes? The answer comes when Carol finds herself face-to-face with the true spirit of Christmas.

Actually, this is one of those odd things that happen in publishing. I was working on Return to Me (a prodigal daughter story) when my publishing schedule got changed around. Zondervan decided they wanted that novel to come out at a different time of year, so they requested I do a Christmas novella first. Because I was already invested in the two sister protagonists in Return to Me, Elena and Roxy Burke, I decided I would enjoy telling the love story of their parents, Jonathan and Carol. I thought back to my first Christmas as a teenage bride and the struggles young couples can have as they try to meld different Christmas traditions from two separate families into something new and unique to them. That was the starting point, but as happens with all of my ideas, the characters took the story the way they wanted it to go.

2) The novel, Return to Me, is a sequel to this novella. Tell us about it.

Sure. Here is the back cover copy for Return to Me which releases in July 2007:

Ambition lured her away.
Failure brought her home.
Can grace heal her broken heart?

A lot has changed since Roxy Burke escaped small town life to become a Nashville star. Her former boyfriend Wyatt has found Christ and plans to become a minister. Her sister Elena, who comforted Wyatt when Roxy ran away, is now his fiancee. Her father Jonathan, a successful businessman, is still heartbroken over the estrangement of Roxy from the family.

Now Roxy–her inheritance from her grandmother squandered, her hopes of stardom dashed–finds her way home, not by choice but because it’s her only option. Her father’s love and forgiveness surprise her, but her very presence throws the contented Burke family into turmoil, filling Roxy with guilt and shame.

Elena is shocked to discover doubt and resentment in her heart about her father’s easy acceptance of Roxy into the family circle. Wyatt wrestles with doubts about marrying Elena. And Roxy struggles to accept forgiveness. Isn’t she more deserving of rejection? As the story of the prodigal plays out, each member of the Burke family must search for and accept God’s grace.

3) Can’t help noticing that both Carol and her daughter Roxy love to sing and dream of singing careers. Are you a singer?

I love music and have the heart of a great singer, but alas, not the voice. My singing borders on being a “joyful noise.” I can stay on key most of the time, but perfect pitch is not one of my gifts. Still, in my car or around the house, I am usually singing along to something (contemporary Christian, worship, country, golden oldies). The louder it’s cranked, the better I sound.

4) This is your 50th release. Do you have a favorite among your own books?

I have different books that are favorites for different reasons. All of my CBA novels were written because the story was important to me at the time, because I felt God wanted me to write it, so I could never pick just one.

5) You’re a native Idahoan and most of your books are set there. If you had to move out of state, where would you go?

Somewhere in the west where at least one mountain range is always in view. I mourn for the mountains when I can’t see them. Of course, Hawaii might be nice. I could lie on the beach and look at the mountains. Not quite the same mountains I’m used to, but I think I could acclimate.

6) What scripture verses have spoken to you lately about your writing?

I’ve kept this one on my desktop for many years:

“Be strong and courageous, Robin, and do the work. Don’t be afraid or discouraged by the number of words you need to write, for the LORD God, my God, is with you. He will not fail you or forsake you. He will see to it that all the work related to this novel is finished correctly.” (1 Chronicles 28:20, Robin’s Revised Version, based on the NLT)

A more recent one is this:

“But my life is worth nothing unless I use it for doing the work assigned me by the Lord Jesus — the work of telling others the Good News about God’s wonderful kindness and love.” (Acts 20:24)

7) Name one thing you would change about your physical appearance and why?

I would have different hair, not thin and baby fine. I’m tired of bad hair days.

8) Since your new release is about Christmas, let’s end with a Christmas question. Name your favorite holiday dessert and why.

Frosted sugar cookies. When my two daughters were little, we would take a Saturday in early December to make cookies, to eat and to give away to others. I would roll, cut, and bake. They would sit on stools at the long kitchen counter and frost. There would be one bowl of red frosting, one of green, one of blue, one of yellow, and one of white. I cut snowmen and stars and Santa Clauses and Christmas ornaments. There was frosting all over the counter by the time we were done. Oh, and all over my daughters’ mouths, too. Those December Saturdays ended a long time ago, but I still remember and miss them.

Thanks for having me on your blog. May the coming holiday season be rich with love for you and your readers. American Idol finalist Mandisa speaks openly and honestly about how her faith was challenged and deepened as a result of her experience on the hit television show. She talks about her lifelong battle with food addiction, how it has affected her life, and how the now-famous derogatory remarks made by...

Brothers (Legacies of the Ancient River) As famine overtakes the land, Simeon leads his brothers into Egypt to buy grain. He doesn't recognize the vengeful ruler he must bow before: Joseph, his long-lost brother. The very brother Simeon sold into slavery years ago. Now, it is the brash Simeon's turn to know imprisonment. Only Mandisa, the ...