Posted on January 17, 2011 | In Uncategorized No Comments 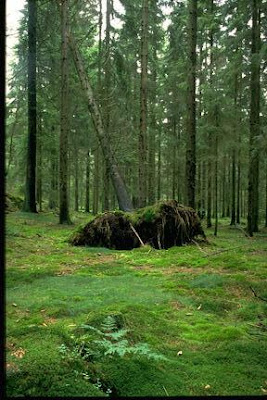 A stand of oak trees lay between the pasture outside Margate Castle and the village; lonely sentries for the army of oaks that dwelt deeper in the depths of King Henry’s forest. “I know this spot,” Afton said, skipping ahead of her companion. “Would you like me to show you a magic place?”

“There are no magic places in the forest,” Calhoun answered, lifting his chin. “My father and I hunt in these woods, and he would have told me if such a thing existed.”

After considering her words, he nodded. “All right, show me this place.” He threw the floral wreath over his shoulder. “Lead on, girl, and I will follow.”

Afton laughed and scampered into the trees. The ground at the edge of the forest had been recently flattened by the footsteps of eager villagers searching for greenery, but Afton moved quickly into the deep woods where the brush grew thicker and footing was more uncertain. Calhoun looked up uneasily as the trees thickened and daylight disappeared from around them.

He struggled to keep up. The wreath was awkward and scraped against his side. He would have thrown it off, but he was anxious to present it to the mysterious Queen of Sheba. He also found it difficult to keep his footing in the leaves that carpeted the forest floor–his previous journeys into the forest had been on horseback, never had he actually walked through it.

He was tired and a bit cross when he finally caught up to the girl, who stood before a pair of massive oak trees. “I call them the twin trees,” she said, her eyes shining as she gazed upward. “See how the trunks have wound around each other? Why did they do that, do you know?”

Calhoun made an effort to close his mouth and quiet his breathless panting. “I suppose they grew together,” he answered, his voice sharp. “Does it really matter?”

Afton shook her head. “No. But up there, where both trunks bend together, they point to my secret place.”

Calhoun’s eyes followed her hand. Perhaps twenty feet from the ground, both trunks jutted sharply westward, then seemed to recover and reach again for the warmth of sun and sky. He looked from the tree to the west–what place could this simple girl have found?

He was about to ask when she suddenly smiled and whirled away from him. She ran about twenty paces to the crest of a hill, then jumped down and out of sight.

Calhoun followed, then gasped at his delightful discovery. Beyond and below the hill lay a perfectly round pool, shimmering like an emerald in a dark and lush earthen setting. No human footsteps had crushed the dainty vegetation surrounding this pool, indeed, the boy wondered if anyone but this blonde sprite had ever visited the place.

Afton sat on a rock at the edge of the pool, her long legs gently skimming the surface of the water. “It’s nicer than you might think,” she told him in a conspirator’s whisper. “You can swim here and no one will bother you. I call it the Pool of the Twin Trees.”

“How did you find it?” Calhoun asked, his voice sounding strangely loud in the stillness. “Does your tutor let you enter the King’s forest–”

“My what?” She crinkled her nose and grinned, and he noticed for the first time that she was missing two front teeth. “I come here when my mama says I am free to play. I learned to swim here, too. Watch.”

Without warning, she kicked off the simple slippers she wore, shimmied out of her outer tunic, and dove smoothly into the water. He was amazed that the water was transparent; the emerald quality of the water came from moss growing on the bottom. He could see every movement the girl made, and soon her head and shoulders appeared at the far end of the pool, her soaked chemise clinging to her skin. “Come in,” she called, her teeth chattering. “It’s cold, but you’ll get used to it.”

Calhoun pondered his situation. He had learned to wrestle and fight, to throw horseshoes and handle a horse. But never had he learned to swim. Yet, the girl made it look easy, as simple as jumping in and sailing underwater to the far side of the pool. But what if it were not easy? What if he floundered and sank? Drowning would be better than asking for help, but neither choice was attractive.

“I want to go see this so-called Queen of yours,” he called, his chin jutting from his youthful jaw. “My patience grows thin.”

Afton dove and again became a rippling watery angel, then reentered the world of light and air and climbed out onto the bank. She threw her tunic over her head and stepped into her slippers. “We can go now,” she said, passing Calhoun without a backward glance. “But I could teach you to swim.”

In 1627 a shipload of children makes its way to the colony of Jamestown. The children are not passengers but cargo to be sold into servitude. Only two people are not destined for this unexpected fate--Kimberly Hollis and her mother, who are sailing to America to join Kimberly's father. The voyage won't be easy. Not only is the main hold dirty and crowded with homeless children, but the crew of the Seven Brothers ship will have to courageously battle a fierce storm. Kimberly and the captives must rely on each other and God to make it safely to the New World. Recommended for ages 10-13.

Deep in the lush and dangerous rain forests of Peru, Alexandra Pace and her team search determinedly for a cure for deadly diseases. One strain of the disease has already begun the process of ravaging Alexandra's own mind and body. Finding a cure is the only hope for her and for her daughter, who ha...